Thomm Jutz Single – “Crazy If You Let It” – Available Now! 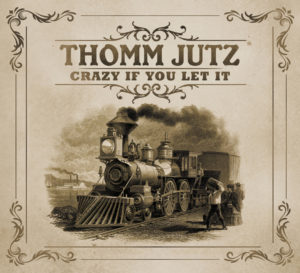 Mountain Fever Records is excited to announce the first single release of newly signed singer, songwriter, producer, and guitar player Thomm Jutz. The first single, “Crazy If You Let It,” drops to radio today and is the title track of his debut album due for release October 6th.

Bluegrass fans are already familiar with Jutz’s music through the many hit songs he’s written for other artists such as Balsam Range, Junior Sisk & Ramblers Choice, Irene Kelley, Terry Baucom and the Dukes of Drive, and many others. And though his songwriting success has been quite significant, his artistry as a singer, producer, and musician have served him equally as well as evidenced just this year with the four nominations he received from the International Bluegrass Music Association for Songwriter of the Year, Recorded Event of the Year (two nominations), and Song of the Year. And the accolades aren’t just coming by way of nominations; Jutz has gained admiration from numerous contributors to the music business, as well. “For years I have hoped that some young man would get off the bus in Nashville with a guitar wrapped in a cellophane dry cleaning bag and bring something new and exciting to the music scene,” said legendary songwriter Tom T. Hall. “As an old songwriter myself, I am pleased that one of my wishes has come true. Thomm Jutz is in town and the town is all the better for it.”

Released to radio today and co-written with Andrea Zonn and Bill Lloyd, “Crazy If You Let It” sets the tone, figuratively and literally for the entire album. The song begins with Jutz’s solo guitar, soon joined by his soulful, touching, and sincere voice. Zonn’s harmony vocal is like drops of water that, with Jutz’s lead, flows flawlessly together as two streams into a bending, steady river of emotion.

“Crazy If You Let It” is available today to radio programmers who may download the song via AirplayDirect or by emailing radio@mountainfever.com for a digital download. This is the title track of an album that will be released October 6th. For more information on Thomm Jutz, please visit www.thommjutz.com. For more information on Mountain Fever Records, visit www.MountainFever.com.
Uncategorized