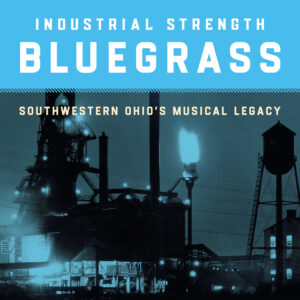 Smithsonian Folkways celebrates the release of Industrial Strength Bluegrass, the story of bluegrass’ transformation from a music to a movement, carried north by Appalachians seeking a better life in the booming post-WWII factories of Southwest Ohio. The 16-song collection was produced by IBMA Award-winning musician/bandleader Joe Mullins, whose father – fiddler and radio personality Paul “Moon” Mullins – made that journey and helped found the region’s bluegrass scene. The compilation (companion to the new book of the same title from University of Illinois Press) presents Southwest Ohio bluegrass classics remade by an all-star cast featuring Country Music Hall of Famers the Oak Ridge Boys and Vince Gill, Bluegrass Hall of Famer Bobby Osborne, and many of today’s finest bluegrass and Americana artists including Lee Ann Womack, Dan Tyminski, The Isaacs, Sierra Hull, and more.

Joe Mullins & The Radio Ramblers open the set with Dwight Yoakam’s“Readin’, Rightin’, Route 23.” It’s a highly personal song detailing Yoakam’s family journey from Pikeville, Ky., to Columbus Oh., but it’s also the story of Mullins’ family and countless more. They arrived in Ohio as immigrants in their own country, dismissed as “Briarhoppers” and ridiculed for their clothes, their food, their dialect, and their fiddles and banjos. Instead of abandoning their roots, they wore them as badges of honor, turning poverty into poetry, creating a bluegrass sound heard and loved the world over.

Every Friday after work, thousands packed their old cars to go “down home” for the weekend. Those who couldn’t headed to the bars and honky tonks of Cincinnati, Hamilton, Middletown, and Dayton, to be sung back home by bluegrass bands performing on makeshift stages through MacGyvered sound systems. Playing five sets a night for drunken, brawling, homesick Kentuckians, the bands and their music became tougher and louder, blazing through the smoke and noise like a fast-moving train. That sound shines on tracks like Dan Tyminski’s “20-20 Vision,” originally recorded by Jimmy Martin and the Osborne Brothers, and Vince Gill’s intense take on Flatt & Scruggs’ “Baby Blue Eyes.”

Recording studios and radio stations offered careers, but the defining sound of Southwest Ohio bluegrass was created in bars. There, musicians and fans formed the first real bluegrass community, and that spirit of adventure in every migrant leaving home for a new life found its way into the music. Southwest Ohio bluegrass was a unique combination of deep tradition and game-changing innovation. You can hear it in “Mountain Strings,” mandolinist Frank Wakefield’s rock-influenced instrumental, performed by an all-star band led by mandolinist Sierra Hull and featuring Kristin Scott Benson on banjo (both are among the first women to win IBMA honors on their instruments; this is their first recording together). This version of the tune and two other tracks on the album feature pioneering African American drummer Phillip Paul, veteran of hundreds of King sessions, from gritty R&B to hard-driving bluegrass. At 95, the unstoppable Mr. Paul is still gigging in Cincinnati with his jazz trio.

Dayton’s Red Allen, Bluegrass Hall of Fame member and one of bluegrass’ all-time great voices, revolutionized bluegrass harmony with Bobby and Sonny Osborne. Driving back to Dayton from WWVA’s Wheeling Jamboree, Bobby was singing “Once More.” Sonny came in on baritone, but as Red told it, he was too tired and tipsy for high tenor, so he sang an octave lower. That new “high-lead” sound powered their 1958 crossover hit and became the Osbornes’ trademark. It’s performed by The Grascals, whose co-founder Terry Smithplayed with the brothers for 14 years.

Before Red’s youngest son Harley Allen became a BMI Songwriter of the Year, he was one of bluegrass’ finest lead and tenor singers, performing with Ronnie, Greg, and Neal Allen in the Allen Brothers and with Mike Lilly in the Allen Lilly Band. Both groups recorded Harley’s “Suzanne,” sung here by Mo Pitney and the band Merle Monroe.

Family runs deep in Industrial Strength Bluegrass. Joe Mullins’ son, Daniel Mullins, an award-winning bluegrass journalist, provides a history lesson in detailed liner notes. Gospel group The Isaacs features siblings Sonya, Becky, and Ben with their mother Lily. Their father Joe was a mainstay of Ohio bluegrass in the ‘60s and ‘70s. Joined by the Oak Ridge Boys and reunited with Joe, they sing his “Garden Tomb.”

Another Southwest Ohio bluegrass great deserving more recognition is Dave Evans, a banjo player with a devastating high-lonesome voice. Country artist Lee Ann Womack does a stellar take on Evans’ “From Life’s Other Side.”

Industrial Strength Bluegrass “takes it home” with “We’ll Head Back to Harlan.” Sung by Bobby Osborne, one of the last of bluegrass’ first generation, it’s a first-person account of those weekly Appalachian homecomings and the dream of moving back for good. Few ever did, but as Industrial Strength Bluegrass shows, their hillbilly odyssey created some of the finest bluegrass ever made.

To celebrate the album release of Industrial Strength Bluegrass, Joe Mullins along with Miami University Regionals and University of Illinois Press are presenting a LIVESTREAM concert featuring artists from the album including Mullins & The Radio Ramblers, Rhonda Vincent, The Isaacs, and Caleb Daugherty. Fred Bartenstein and Curtis Ellison, co-editors of the book by the same name, will make presentations on southwest Ohio’s influence on modern day Bluegrass music, and also offer an inside look into the making of both the book and recording. The LIVESTREAM concert begins at 12noon ET on Saturday, March 27th. An all-access pass is avaialble for $14.95 and may be purchased here.