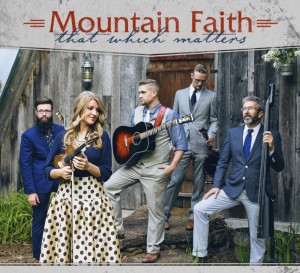 Mountain Fever Releases That Which Matters from Mountain Faith Band
Mountain Fever Records is proud to announce the release of the brand new album from International Bluegrass Music Association’s (IBMA) Emerging Artist of the Year nominee, Mountain Faith. That Which Matters is available everywhere today!
North Carolina’s Mountain Faith is Summer McMahan on fiddle and lead vocals, her brother Brayden on banjo, their dad Sam, on bass, with Luke Dotson on guitar, and Cory Piatt on mandolin. Although the band has been performing together since 2000, it’s only been in the last few years that the music industry has begun taking note of the talented ensemble. In fact, earlier this month, Summer was awarded the IBMA’s Momentum Award in the Vocalist category. While bluegrass fans may have been on the Mountain Faith “bandwagon” for a few years now, the rest of the country began taking notice of the family band through regular appearances as contestants on NBC television’s popular show, America’s Got Talent, making it through to the semi-finals in New York City.
That Which Matters has already drawn excellent reviews from radio and media. The first single, “Emily (It’s Love)” was released earlier this year and John Lawless of Bluegrass Today said, “…here Summer McMahan sings it solo with a slurry, slippery style that is very modern while remaining true to her bluegrass roots. Simply brilliant.” The same could be said about every track on this positive, gospel-tinged project. The album showcases the vocal talents of the entire band with Summer singing most all the lead vocals supported by beautiful, almost haunting in places, harmony vocals. There are plenty of hot licks and high lonesome harmonies to make this a favorite among bluegrass fans while the song selection is carefully thought out with the lead track, “Someone Prayed” setting the tone for a listening experience full of songs of hope, love, celebration  and praise. And even though it would be tough to choose just one favorite, the closing track, “There Is A God” is surely a top contender.
That Which Matters by Mountain Faith is available everywhere today. Radio programmers may download the album via AirPlayDirect and consumers may purchase it through iTunes. For more about Mountain Faith, visit www.mountainfaithband.com. For more about Mountain Fever Records, visit www.mountainfever.com.
Uncategorized