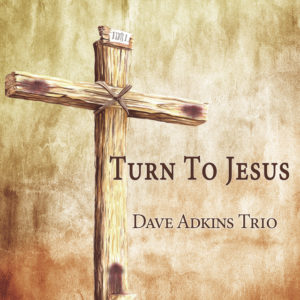 Mountain Fever Records announces the release of Turn To Jesus, the latest album from Dave Adkins and the first from the Dave Adkins Trio.

Last year, Adkins, who has released three chart-topping albums for Mountain Fever Records, partnered with two close friends, Richie Rose and David Taylor, to sing in a small local church. The result was something even Adkins could not have predicted. A cellphone video of the stripped-down, guitar and vocals-only performance was posted on social media and captured the attention and hearts of so many, that the demand for more suddenly became very apparent. And thus, the Dave Adkins Trio was born.

The trio’s first album, Turn To Jesus, offers music that will transport the listener to a small church full of red-backed hymnals they might have attended long ago; a place where they shared a pew with close family members and first learned about God and harmony singing. Filled with songs such as “I’ll Fly Away,” and “Old Rugged Cross,” this album will definitely tug at the sentimental heart-strings. The trio also broadens the scope of gospel music by including more recent written favorites such as Tom T. Hall’s “Me And Jesus,” and the Gaither’s “He Touched Me.” Fitting in seamlessly among all these classics, is the title track penned by Adkins and gifted writer, Mark Brinkman. As Sherri George stated in the album’s liner notes, “Once in a while an album comes along that is a game changer. A life changer. A rock-you-all-the-way-to-your-soul force that comes alive. This album qualifies.”
Turn To Jesus is available to radio programmers via AirPlay Direct or a digital download by emailing a request to radio@mountainfever.com. Consumers may order the album now through various popular music outlets. To view a full tour schedule for the Dave Adkins Band, along with select dates for the Dave Adkins Trio, please visit www.daveadkinsmusic.com. For more on Mountain Fever Records, visit www.mountainfever.com.
Track Listing

If you’ve ever met Dave Adkins, you might find yourself surprised to find the larger-than-life persona on stage is exactly that off stage, as well. He’s a powerhouse of talent and his vocals, songwriting, and excitable stage presence simply astound audiences, drawing them in almost instantaneously within the first few moments of a live performance experience. New fans of his music soon learn that behind Adkins’ immeasurable talent is a heart of gold, sincere in his approach to his music and with his fans. Since signing with Mountain Fever Records, Adkins has released three projects, including two solo records, all achieving much success with fans, reviewers, and radio programmers. His latest self-titled album produced four charting singles including “Change Her Mind” which has been on the National Bluegrass Survey’s Top 30 Songs for over 10 months.
Uncategorized