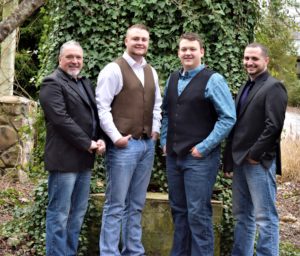 ClayBank is a new and impressive bluegrass band born out of the fertile musical ground of western North Carolina. The unique story of the formation of the group centers on a bluegrass veteran, who joined forces with a fellow picker in his mid-20s, and two talented teenage musicians that are about to be introduced to the greater bluegrass world. Gary Trivette is the elder statesman of ClayBank, a bassist and banjo player who has previously played with groups such as Carolina Crossing and Southern Accent. While sitting in a side room at the Appalachian State Old-time Fiddler’s Convention in Boone, NC, in 2015, he found himself jamming with then 15-year-old mandolinist Zack Arnoldand guitarist Jacob Greer who was 17. As fate would have it, Trivette’s former Carolina Crossing band mate Tyler Thompson knew both Greer and Arnold from an early age. Soon, after all of the future members of ClayBank realized they had a connection with each other, the foursome established a weekly jam session with Thompson playing the banjo, Trivette on bass, Arnold on the mandolin, and Greer on guitar. As the musicians got to know each other and their blend began to evolve, it was the lead and harmony vocals of the quartet that began to turn heads. Named after the street in Ashe County where their weekly jams took place, ClayBank began to test the bluegrass waters by entering band contests at various festivals. They won the bluegrass band competition at the Union Grove Fiddler’s Convention in April of 2015 and came in 3rd place at the Society for the Preservation of Bluegrass Music of America (SPBGMA) convention’s band contest in 2016. That same year, they won the bluegrass band competition at RenoFest.

Though years apart in age, ClayBank’s band mates are on the same page as far as the bluegrass trail they want to explore. “They like the same kind of driving bluegrass music that I do,” says Trivette. “It is strange to find people with that difference in age that enjoy the same music. As for the young men in the band, I can give them some of the history of bluegrass music, but they already know a lot about it. Our musical style can basically be found between 1980 and 1999 or so, influenced by Doyle Lawson’s original Quicksilver band.”

ClayBank’s debut album on Mountain Fever Records can be expected May 2018 and will feature mostly original songs written or co-written by the band. The group’s impressive array of three lead vocalists is complimented by their collective church-inspired ability to sing harmony vocals. All of that is buoyed by their awesome multi-generational musicianship. The band is filled with youth and a modern approach to bluegrass music while at the same time showing reverence for the traditional side of the genre.

For more information on ClayBank, please visit www.claybankbluegrass.com and www.MountainFever.com.