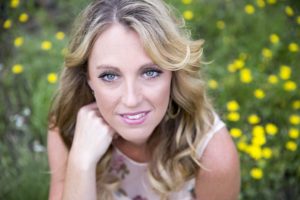 One of Bluegrass music’s favorite record labels has once again raised the bar of excellence with the addition of Amanda Cook to the Mountain Fever Records roster. Amanda joins an impressive list of label-mates that include Junior Sisk & Ramblers Choice, Mac Wiseman, Volume Five, and other well-respected and successful bands.

Jay, Florida’s Amanda Cook acquired a love of bluegrass from her father who played banjo throughout her childhood. In early 2007, Amanda formed bluegrass group High Cotton with her father and received her first taste of performing, fueling a fire to continue on a professional level. In 2013, determined to create her own sound, Amanda stepped out on her own and released her first solo album One Stop Along the Road. The self-released album brought Amanda significant regional attention and furthered the desire to grow her brand, resulting in the addition of a full touring band. Amanda has created quite a loyal fan-base in the Florida, Alabama, and Georgia region, as evidenced by her recent performance at Bluegrass On The Plains in Auburn, Alabama, where dozens of followers shouted requests from the crowd, proving Amanda not only has the vocal chops to deliver a soul-wrenching song, but also commands great stage presence with her light-hearted, down-to-earth style. The result, is an undeniably strong connection with her audience.

“We’ve watched Amanda grow so quickly as an artist the past couple of years,” says Mountain Fever Records president, Mark Hodges. “She has everything it takes to be one of the top artists in the country and we’re proud she has chosen to take us along on the journey.”

“I am humbled and honored to join the Mountain Fever Records family, and I’m looking forward to working closely with Mark Hodges and his staff. I anticipate wonderful things for the future of my music with this great group behind me!!”