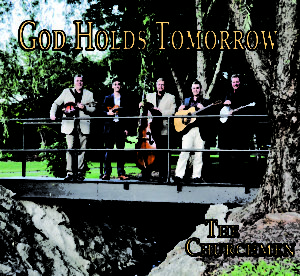 Mountain Fever Records announces the release of new music from bluegrass gospel group, The Churchmen. “Alone On A Hill” drops to radio today and is the first single from their new album, God Holds Tomorrow, due for release September 1st.

Throughout bluegrass history, gospel music has played an ever-important role. In fact, gospel is so prevalent in bluegrass, that including a couple of gospel songs on an album or during a live performance is practically an unspoken requirement. The Churchmen, have made a career of performing bluegrass gospel music and have created their own niche since they formed in 1989 when they first began singing in local churches. Their southern gospel style, four part harmony, along with the sound of the bluegrass instrumentation, gives them a unique sound that has gained attention all across the country and abroad. The five-member group consists of Keith Clark (bass), Gerald Harbour(mandolin), Carroll Arnn (banjo), Avery Welter (guitar) and Daniel Greeson (fiddle) and all of them lend vocal talents. For fans of bluegrass gospel, The Churchmen keep it straight down the middle, giving reverence to God and spreading his message of salvation. The band’s third album for Mountain Fever Records, God Holds Tomorrow, will be released September 1st, but the first single, “Alone On A Hill,” is being released to radio today.
Written by Charley Stefl and Thomm Jutz, “Alone On A Hill” tells a powerful story. Gerald Harbour states, “This song has a great message in it, telling of three different instances of Christ’s life. ‘Alone on a hill,’ abandoned by his own father, Jesus made the ultimate sacrifice for us all.”

“Alone On A Hill” is available today to radio programmers who may download the song via AirplayDirect or by emailing radio@mountainfever.com for a digital download. Mountain Fever will release The Churchmen’s latest album for the label, God Holds Tomorrow, September 1st. For more information on The Churchmen, please visit www.thechurchmen.com. For more information on Mountain Fever Records, visit www.MountainFever.com.
Uncategorized