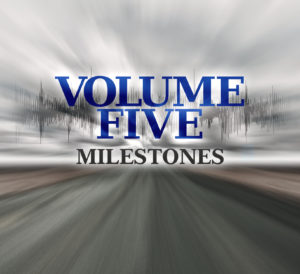 Mountain Fever Records is happy to announce the release of the newest album from the International Bluegrass Music Association’s (IBMA) Emerging Artist of the Year, Volume Five. Milestones is available to radio and consumers today!

Nashville is known as a “10 year town” — indicating it takes a full 10 years to achieve any real success in the music business. And while fans have long been hot on the trail of Volume Five (V5), it’s easily said the industry is finally catching on and wising up. After a full decade of playing thousands of shows and making some of the best records in bluegrass, V5 has hit their stride. In 2017, the IBMA honored V5 with Emerging Artist of the Year and Song of the Yearfor “Drifter,” arguably one of the most played tracks of the decade, thus far.

Aptly named, Milestones is the seventh album for V5 on Mountain Fever Records, and is further proof the band knows how to find and record top-notch material. Fellow bluegrasser Jerry Cole gets writer credits for the bookend tracks, “Just Beyond the Window” and “Stoney Hill,” both exemplary in setting the tone for the record while closing with the proverbial exclamation point. “Looks Like Losing Love” is written by Ronnie Bowman and Billy Droze, both considered among the elite in their craft. Of the 12 cuts, it’s no coincidence the three ballads are co-written by Craig Market who clearly has a knack for weaving words that tug at the heartstrings when teaming up with writers such as Josh Miller, Becky Buller, and Tim Stafford.  The albums first single, “Now That’s A Song” was written by Bob Minner and Shawn Lane, and has already taken a well-deserved ride on the song charts including multiple weeks on Bluegrass Today’s Weekly Songs chart and coming in at #4 on February’s Top 20. No doubt, Milestones is a very well-written album, matched perfectly with a band who performs the music the way it was intended.

In the liner notes, Stafford eloquently summarizes V5 and Milestones:

“Volume Five has a very distinct sound that begins with Glen Harrell’s pitch-perfect, rich baritone voice. He has a great emotional range in his singing that allows the band to do a wide variety of songs effectively. The fact that Colby Laney and Jacob Burleson often switch guitar and mandolin seamlessly to create different tones and sounds testifies that Volume Five is one of the top instrumental bands on the circuit. Patton Wages is a groove machine on banjo, and bassist Chris Williamson provides a propulsive, rock-solid foundation. Glen’s fiddling is icing on the cake, as is guest Gaven Largent’s (Dobro) tasteful fills and leads. Jacob already has one of the best mandolin chops in bluegrass, and Colby is an inventive and powerful lead and rhythm guitarist. But this is a vocal band first, even beyond Glen’s powerhouse singing—the harmonies are exquisite as well, wrapping themselves around his lush lead vocals. This is one great bluegrass record.”