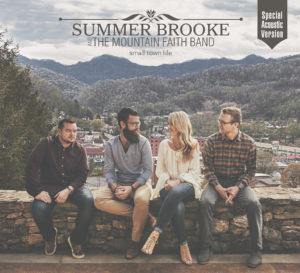 Brand new music from Summer Brooke and The Mountain Faith Band drops today on Mountain Fever Records. Small Town Life is the latest album from this dynamic group of musicians whose music continues to be cutting edge of both bluegrass and Americana.

By now, bluegrass fans across the globe have fallen in love with Sylva, North Carolina’s innovative ensemble: Summer McMahan on fiddle, her brother Brayden on banjo, their dad Sam on bass, with Nick Dauphinais on guitar, and Cory Piatt on mandolin. They made their mark on the hearts of everyone who watched them shine on America’s Got Talentand fans of the band watched intently as they made their way to the semi-finals of this nationally broadcast network television show. Since then, they have made their Grand Ole Opry debut, won the International Bluegrass Music Association’s 2016 Emerging Artist of the Year, have been appearing regularly at professional sports stadiums across the country performing the National Anthem, and were named the Atlanta Braves 2016 Band of the Year.  Long-time followers of Summer Brooke and The Mountain Faith Band have witnessed their musical growth and the creation of a “band-voice” that is uniquely their own, all the while remaining true to their roots and their faith. Their musicianship is on par with the most lauded of the latest generation of accomplished pickers—Noam Pikelney, Chris Thile, Chris Eldridge—yet within their own style of tasteful, precise, and melodic maneuvers.

Their new album, Small Town Life, captures the essence of everything that makes this group of musicians incomprehensibly great: talent, soul, and heart. In the album’s liner notes, journalist and radio broadcaster Daniel Mullins writes, “While the themes embedded in Small Town Life are timeless, Summer Brooke & Mountain Faith are not afraid to showcase their youthful exuberance with vibrant musical arrangements, breaking rules in all the right ways. The exquisite musicianship and vocal prowess only aide in bridging the gap between their old hearts and a 21st century audience.” Released just over a month ago, the album’s first single, “Umbrella,” was reported to have significant airplay; enough to shoot it to #3 in its second week of radio life and charting every week since. If “Umbrella” is any indication, Small Town Life will be this summer’s big hit!