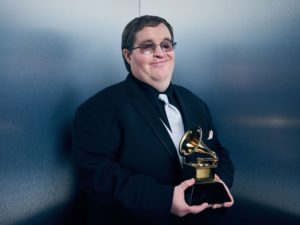 Michael Cleveland celebrated a very big weekend with two career milestone achievements. The two-time nominee was awarded his first GRAMMY® by the National Academy of Recording Arts & Sciences (NARAS) and the Louisville (KY) Federation of Musicians recognized Cleveland as their 2020 Musician of the Year.

Closer to home, the Louisville Federation of Musicians awarded their highest honor of Musician of the Year to Michael during their annual ceremony. Due to the GRAMMY® Awards appearance, Cleveland was notified in advance and visited the organization for which he has been part of most of his professional career. As a young musician, Cleveland began playing venues in the Louisville area and has become a regular in the thriving music scene not only as a bluegrass musician, but also making guest appearances within other genres of music, including two performances with the Louisville Orchestra.

These two career accolades come on the heels of Michael Cleveland & Flamekeeper winning the International Bluegrass Music Association’s (IBMA) sixth Instrumental Group and Cleveland’s 12th Fiddle Player of the Year awards. In early 2019, Flamekeeper – The Michael Cleveland Story, a feature length documentary produced by John Presley and Cortland Ingram, enjoyed a star-studded film premier at the Country Music Hall of Fame in Nashville, and is available for streaming and purchase on Amazon.com.