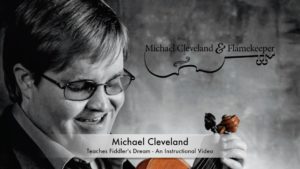 The International Bluegrass Music Association’s most awarded fiddler, Michael Cleveland, is embarking on a new venture with his first ever instructional video. Known as one of bluegrass music’s premier musicians, Cleveland has been offering lessons via Skype for several years, but it was his good friend, Gil Benson, who suggested an instructional video would be helpful to aspiring musicians and fans of Cleveland’s alike. With Benson’s guidance, and the accompaniment of Brian Allen on guitar and Tyler Griffith on bass, Michael has now released his first instructional video.

“I’ve had a lot of people ask me over the years if I had any sheet music or tablature for the fiddle tunes I have recorded on my albums,” explains Cleveland. “Now, we have something even better! Whether you’re a beginner or an advanced player, I think everyone will be able to learn from this lesson video. Thanks to my friend Gil Benson for all of his hard work on this project. This wouldn’t have been possible without him.”

“Michael is an amazing fiddler with a style all of his own,” says Benson. “In his first instructional video, Michael teaches how to play ‘Fiddler’s Dream,’ the title cut from his new solo CD.  He incorporates many of the past great fiddler’s licks into his playing and still you know it’s Michael by his clear, powerful tone and attack. The video is a fantastic resource to learn Michael’s style as well as some of the classic fiddle licks of Scotty Stoneman, Benny Martin, Bobby Hicks and others. Along with the performance, the video includes all four solos played slowly and then broken down to teach each lick. All solos are accurately transcribed complete with bowings, fingerings and chords. Two jam tracks are also included to allow practice accompaniment. I highly recommend this instructional video to all fiddlers who have an interest in improving their fiddle playing.”