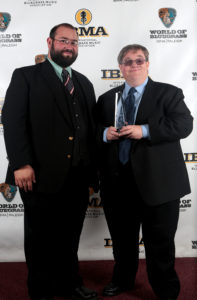 The International Bluegrass Music Association held their annual awards ceremony in Raleigh, North Carolina on Thursday, September 28th, awarding Michael Cleveland & Flamekeeper with TWO collective IBMA honors. Cleveland won his sixthInstrumental Recorded Performance of the Year trophy, this time for the title track from his recent solo offering on Compass Records, Fiddler’s Dream, while the band won Instrumental Group of the Year, making this their fifth win in this category.

Cleveland was thrilled to be included in the induction of the International Bluegrass Music Museum’s newest Hall of Fame member, fiddle legend Bobby Hicks. After a delightful induction by Ricky Skaggs, Cleveland was joined on stage by banjo master Bela Fleck to “play” homage to his fiddle hero with a rousing performance of classic Bobby Hicks inspired fiddling that included snippets of “We Can’t Be Darlings Anymore” and “Wheel Hoss.” Additionally, Cleveland performed twice during the prestigious awards ceremony; as part of the Virginia Bluegrass Tribute alongside Jim Lauderdale, Carl Jackson, and Larry Cordle, and as part of the grand finale performance of “Rocky Top,” which reunited the song’s original performers, Bobby and Sonny, The Osborne Brothers.

Of the evening’s events, Cleveland says he was able to mark many items off his bucket list. “I was anticipating how great this night would be when I was asked to participate in so many special moments with some of my heroes in music. Being on stage with Sonny and Bobby Osborne playing on ‘Rocky Top’ was something I never dreamed would happen in my lifetime. And I’ve made it no secret that Bobby Hicks influenced me greatly as a young fiddle player and still does to this day. To be included in his induction into the Hall of Fame was more than I could have ever dreamed of, and to have Bela Fleck playing with me…it’s all pretty overwhelming.” In spite of performing with so many A-list musicians, the honors Cleveland and his band received were not overshadowed. “I want to thank everyone for the awards, too,” he states. “I’m really proud of Fiddler’s Dreamand all the great collaborations we were able to put together on that album. But I have to say, having the IBMA acknowledge my band, Flamekeeper, is something I really was hoping for. Nathan Livers, Josh Richards, Tyler Griffith, and Jasiah Shrode have worked so hard for this band, giving everything they’ve got for our music, and to have them recognized for their talent and efforts means so much to all of us!”