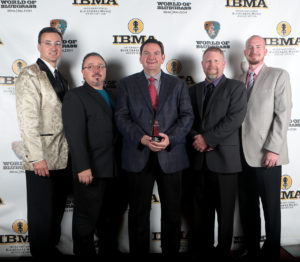 Joe Mullins & The Radio Ramblers (JMRR) are the recipients of the International Bluegrass Music Association’s (IBMA) Gospel Recorded Performance of the Year for their recent hit, “Sacred Memories,” from the their all-gospel album of the same title on Rebel Records. The song features guest vocals by Sharon White Skaggs and Ricky Skaggs as well as Kelsi Harrigill and Charli Robertson of Flatt Lonesome. This is the second consecutive win in this category for JMRR who took the honor home last year for “All Dressed Up” from the same album.

In addition to attending the awards, Joe Mullins & The Radio Ramblers were active participants throughout the IBMA’s World of Bluegrass Conference and Wide Open Bluegrass Festival hosted last week in Raleigh, North Carolina. Mullins presented the Broadcaster of the Year Award during the Special Awards Luncheon on Thursday afternoon, as well as the Bass and Dobro Player of the Year honors during the IBMA Awards Thursday evening. Additionally, Mullins hosted the International Bluegrass Music Museum’s Hall of Fame Reception featuring a Q & A with newly inducted members, Alice Gerrard, Bobby Hicks, and Roland White, and was re-elected for a second term as the association’s Board of Directors Chairman. The band performed for WBCM Radio – Bristol, WAMU’s Bluegrass Country, and during the Wide Open Bluegrass festival to a massive crowd.

Of the week’s events and IBMA Award honor, Mullins says, “We are so thankful for the recognition from the members of IBMA. It’s a wonderful blessing to be recognized for our gospel music, particularly. Thanks to all who encourage us, always.”