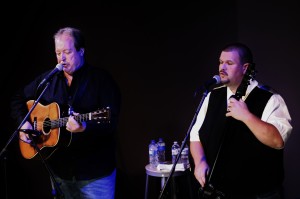 The International Bluegrass Music Association’s 5-Time Male Vocalist of the Year, Russell Moore, is proud to announce the addition of Jerry Cole to his award-winning band, IIIrd Tyme Out, effective immediately. Cole will replace Blake Johnson who has been on medical leave due to illness.

Jerry Cole was raised in Sharps Chapel, Tennessee where he was surrounded by music his entire life. His father was lead singer and guitarist for The Betterway Quartet and taught Cole how to play the guitar and sing. While growing up, Cole took an interest in several genres of music and singing styles which led him to learn to play other instruments. In the early 1990’s, his passion for bluegrass was re-kindled when he heard Doyle Lawson and Quicksilver, IIIrd Tyme Out and The Lonesome River Band—music he did not tire of hearing. Cole landed a job with Pine Mountain Railroad in 2008 where he stayed until 2014 while also performing with Firewater Junction in Gatlinburg, TN. Cole still resides in Sharps Chapel with his wife. Of being offered the full-time performance spot with Russell Moore & IIIrd Tyme Out, Cole states, “Everyone has something they hope to accomplish in their profession. Sharing the stage and singing with Russell Moore & IIIrd Tyme Out just happens to be at the top of my list! I consider it an honor and a blessing to join a group of genuinely good people who share the same passion for quality music as I do.”

“Jerry is a very talented musician and hard worker,” says Russell Moore. “His placement of notes on the bass and his strong vocals are a great match and blend to the band’s sound. We’re all very excited about his inclusion in the group and welcome him with open arms! Our thoughts and prayers are, of course, still with Blake Johnson. We ask that everyone continue prayers and good thoughts for Blake in hopes that his health will improve and the dialysis treatments will become a thing of the past.”

Johnson, who has held the acoustic bass and tenor vocal spot since January 2014, has been ill for some time, eventually taking an indefinite medical leave earlier this year. Although unable to travel, Johnson performed on the band’s newest album, It’s About Tyme, released September 4th. In his stead, Cole performed with the band to a sold-out, enthusiastic audience at their Album Release Concert at the Birthplace of Country Music in Bristol, Virginia. It’s About Tyme has met with great acceptance and has already produced a chart-topping hit with the fist single, “Brown County Red” which reached #1 on Bluegrass Today’s Top 20 Monthly Songs chart for three months.

Russell Moore & IIIrd Tyme Out continue to support the release of It’s About Tyme with a busy touring schedule including a visit to the International Bluegrass Music Awards on October 1st, where Moore is again nominated for Male Vocalist of the Year. For more information on Russell Moore & IIIrd Tyme Out including a complete tour schedule, please visit www.iiirdtymeout.com.