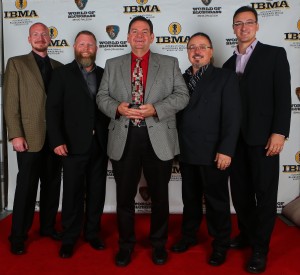 Joe Mullins is the recipient of two awards presented by the International Bluegrass Music Association this past week during the World of Bluegrass Conference in Raleigh, North Carolina. In a special ceremony celebrating industry contributions, Mullins, who has been in radio for over thirty years, was awarded Broadcaster of the Year. During the prestigious IBMA Awards held at the Duke Energy Center for the Performing Arts, he and his band, The Radio Ramblers, took the award for Gospel Recorded Performance of the Year for their recent hit, “All Dressed Up,” from the their Sacred Memories CD on Rebel Records.

Joe Mullins & the Radio Ramblers are previous IBMA Award winners, having been named Emerging Artists of the Year in 2012, but this is the first time for Mullins, who owns a network of radio stations in Ohio and is host of the syndicated weekly broadcast Front Porch Fellowship, to win IBMA’s Broadcaster award. 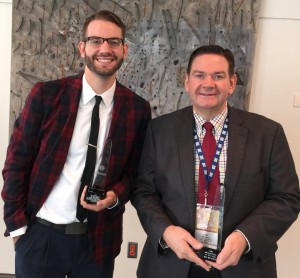 The week-long conference became a true family affair when Mullins’ son, Daniel, was awarded Best Liner Notes for his work on The Blues Are Still The Blues, a retrospective collection of The Traditional Grass also released on Rebel Records, featuring Joe and his father, the late Paul “Moon” Mullins.

Of the accolades Joe said, “I am so thankful for all of the support and encouragement this week. It’s a great blessing to have my work as a broadcaster recognized, and having the talents of The Radio Ramblers and my son Daniel applauded just put it over the top.”

Earlier in the week, Joe Mullins was elected chairman of the board of directors of the IBMA, and has already begun his term by spreading his message that becoming a member of the IBMA is essential to the growth and sustainability of Bluegrass music.