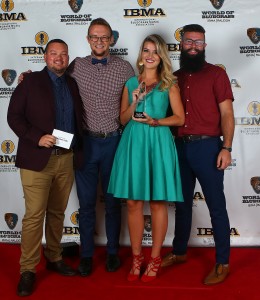 Mountain Faith, a family band based in Sylva, North Carolina were awarded Emerging Artist of the Year. Although the band has been performing together since 2000, it’s only been in the last few years that the music industry has begun taking note of the talented ensemble, especially through regular appearances as contestants on NBC television’s popular show, America’s Got Talent, making it to the semi-finals in New York City just last year. This year, Mountain Faith made their debut on the Grand Ole Opry and have formed a relationship with the Atlanta Braves, making regular appearances at Turner Field during baseball games as the team’s “2016 Band of the Year.” Their most recent single, “Freedom, Family & Faith,” was released on September 30th.

Junior Sisk & Ramblers Choice received Recorded Event of the Year for their hit song, “Longneck Blues” which featured special guest, Ronnie Bowman. The song was the first single from the band’s latest album, Poor Boy’s Pleasure, and spent multiple months atop several bluegrass song charts. Sisk and his band are previous IBMA Award winners, having won Album and Song of the Year in 2012 and Male Vocalist (Sisk) in 2013.