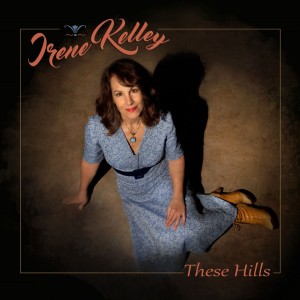 These Hills — the Debut Album for Mountain Fever Records from Irene Kelley —is Available Now!
Mountain Fever Records is pleased to announce brand new music from Irene Kelley is available to radio and consumers today! Produced by Grammy® winner Mark Fain, These Hills is available everywhere great music is sold!
Irene Kelley’s signature mix of Bluegrass, Country and Americana appeals to music lovers across all genres. A native of Latrobe, PA, Kelley discovered her flair for songwriting as a teenager and soon found her way to Nashville, TN where her songs were quickly noticed and recorded by Carl Jackson, Ricky Skaggs and Sharon White. While recording an album for MCA, independently releasing two more records and touring worldwide, Kelley raised two daughters and scored cuts with Alan Jackson, Trisha Yearwood, Loretta Lynn, Pat Green, Brother Phelps, Rhonda Vincent, Claire Lynch, Darrell Scott, The Whites, the Osborne Brothers and others. But it’s not just her songwriting that has drawn much deserved attention her way. Kelley’s pure and lonesome vocal prowess has tugged at the heartstrings of music lovers for years, making her one of traditional music’s most beloved musical story-tellers.
These Hills includes what most would consider an artist’s “dream team” of musicians — Stuart Duncan (Fiddle), Adam Steffey (mandolin), Brian Sutton (guitar), Scott Vestal (banjo), Mark Fain (bass) — while also featuring harmony vocals by industry heavy-hitters Claire Lynch, Ronnie Bowman, Sharon White Skaggs, Cheryl White, Dale Ann Bradley, and Steve Gulley, as well as Irene’s daughter, Justyna. The album kicks off with the hit single “Carolina Wind,” which reached #1 on Bluegrass Today’s Top 20 Songs chart in May. From there, Kelley shows off her hauntingly rich vocal prowess with “Coal Train” which is only overshadowed by the stunningly sentimental-tinged title track, flowing effortlessly into “Johnson’s Hardware Store,” a recollection of simpler times from days gone by. And just when you thought your heart couldn’t take anymore, Kelley sings of her love of a dog with “Lester’s Song,” the future anthem for any animal rescue entity across the country. From start to finish, These Hills begs the listener to live in the moments of each flawlessly written lyric, only to find themselves lost in the strikingly angelic melodies that are delivered through an often heartbreakingly beautiful voice.
“This is a record that is so enormously pleasing on so many levels. As a vocalist, Irene Kelley glows with beauty and expressiveness. As a songwriter, she shines with a luster that few of her peers can match. This is music to cleanse the soul. This is music to raise you up. This is music to touch your heart. This is the music of Irene Kelley.
— Robert K. Oermann, Music Row Magazine —
“Irene is an honest person. That’s evident in every note she sings. And honesty is a virtue, but it isn’t necessarily compelling. Irene Kelley is necessarily compelling. Her voice has a break to it, and in that break I hear truth and love and the places where truth and love come to fragile reconciliation.There’s lots more to her voice, and lots more to her. Irene is nothing like much of what we hear, and something like most of what we seek. She’s tone-true, and full of wild Aster. She’s some melancholy mix that sustains and inspires.”
— Peter Cooper, Journalist —
“These Hills is a study in excellence on so many levels, lyrically, instrumentally and vocally. But more importantly, it possesses that undefinable element of magic that serves as the catalyst of a truly great record. A lifetime in the making, These Hills is already a classic.”
— Terry Herd, Bluegrass Radio Network and Bluegrass Today —

These Hills is available to radio programmers via AirplayDirect or by emailing radio@mountainfever.com and to consumers via these digital outlets and wherever great music is sold. For more information on Irene Kelley, please visit www.IreneKelley.com. For more about Mountain Fever Records, visit www.mountainfever.com.