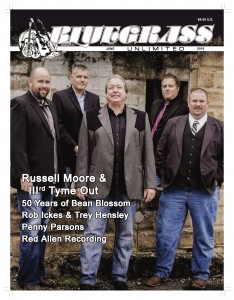 Russell Moore & IIIrd Tyme Out Celebrate 25 Years with TWO Magazine Covers!Russell Moore & IIIrd Tyme Out’s “Tyme For 25” tour celebrating their 25th Anniversary is well underway and they’re having a fantastic time! June is an especially exciting month as they are featured on the covers of not just one, but TWO magazines: Bluegrass Unlimited and IB, the International Bluegrass Music Association’s trade publication. Thanks to journalists Derek Halsey (BU) and Bill Conger (IB) for the interviews!

Part of the festivities kicking off the Tyme For 25 Tour included a LIVE concert broadcast on SiriusXM’s Bluegrass Junction. The band was honored that Kyle Cantrell and the SiriusXM staff extended the invitation  for this concert. What the band didn’t know, is that their 3TO Team Members had organized a surprise reception in their honor immediately following the concert that included refreshments, a beautiful cake and even more surprises! Photos from the event have been uploaded to the band’s website photo gallery. Head over and take a look!