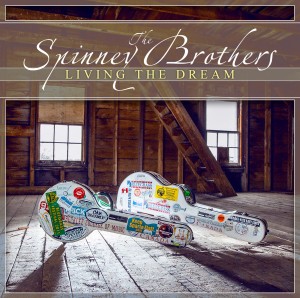 Mountain Fever Records is very proud to announce The Spinney Brothers have made their career debut on Billboard’s Top 10 Bluegrass Albums chart for the week of May 21st with their latest album, Living The Dream, which was released April 29th.
In recent years, The Spinney Brothers have established the reputation of being one of bluegrass music’s hardest-working, well-loved bands due to spending approximately 150 days each year traveling between their Canadian home to venues all over the United States and beyond. Their music and infectious personalities have endeared them to a growing fanbase that has become not only very loyal, but very vocal when it comes to lauding the band’s praises. In 2014, the band was nominated for two IBMA awards for Emerging Artist and Song of the Year which afforded them a performance during the prestigious IBMA Awards; a performance that has since been cited as one of the show’s highlights. Their latest album, Living The Dream, is appropriately titled since that is exactly what Allan and Rick Spinney are doing.
Along with the awards and various accolades, another dream came true with the announcement the band made their debut on Billboard’s Top 10 Bluegrass Albums chart. The chart, comprised solely of the top-selling albums each week, placed Living The Dream at #2, just below comedian-actor-banjoist Steve Martin’s Bright Star: A New Musical.  It’s not everyday that a bluegrass band can say they are taking on Broadway but that’s just exactly what has happened in this instance.
“Very few people in life get to pursue their passions as a career,” said Allan and Rick Spinney. “Music is our passion! For us to be able to tour and make our livelihoods playing music, is a dream come true, which of course is the basis of our new CD, Living The Dream. For something to happen like recognition from the Billboard Music Chart is really icing on the cake, it is quite an honor”
Mark Hodges of Mountain Fever Records quipped, “You know it would have to take King Tut to knock the Bluegrass princes of Nova Scotia from the top Billboard spot!”
The Spinney Brothers continue touring in support of Living The Dream with upcoming appearances in Missouri, North Carolina, Pennsylvania, New York, Indiana, Michigan and Ontario, Canada. For a complete tour schedule and more information on The Spinney Brothers, please visit www.spinneybrothers.com and join them on Facebook and Twitter.
For more information on Mountain Fever Records, please visit www.MountainFever.com.