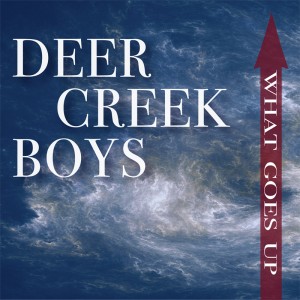 Mountain Fever Records: What Goes Up — The New Album from the Deer Creek Boys —  Is Available Today!
Mountain Fever Records is pleased to announce the debut release from the newly signed Deer Creek Boys is available to radio and consumers today! What Goes Up features 12 tracks of stellar music ranging from contemporary originals to traditional classics.
The Deer Creek Boys were originally formed in 1999 when brothers Justin Tomlin (guitar), Jason “Tater” Tomlin (bass) and their friend Cason Ogden (mandolin) started picking locally in their native Amherst, Virginia. Fast forward to the present-day, when the group has been reformed with the members much more experienced and polished. The group added North Carolina banjo picker Andy Lowe to round out their sound and have been a festival favorite ever since re-emerging on the scene! With individual stints in Nothin’ Fancy, Junior Sisk & Rambler’s Choice, and the Bluegrass Brothers on the band’s resume, the Deer Creek Boys are a powerful blend of energetic picking, hard-hitting harmonies, and top-notch songwriting. Although the members each have a sound supported by years of performing with typically traditional artists, together, the Deer Creek Boys present a youthful, edging-on-contemporary approach to bluegrass that is really all their own.
What Goes Up is the band’s debut album for Mountain Fever Records and is a fine mix of music including original songs written by three of the band members, fresh remakes of  contemporary country radio hits, and a traditional gospel tune, “Little White Church.” With each selection, the Deer Creek Boys put a soothing, almost transcendental treatment to their arrangements that creates a flow from one song to another that is almost seamless. Listeners will be hard pressed to find an album more pleasing to the ear than this up-and-coming band’s first effort.
What Goes Up is available everywhere today. Radio programmers may download the album via AirPlayDirect or by emailing radio@mountainfever.com. Consumers may purchase the album via iTunes and wherever great music is sold. For more information on the Deer Creek Boys, please visit www.deercreekboys.co. For more about Mountain Fever Records, visit www.mountainfever.com.
Uncategorized