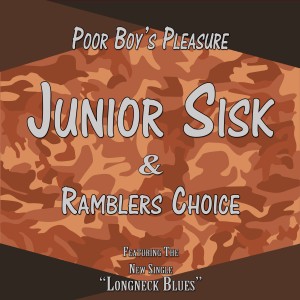 Mountain Fever Records Releases First Single From Upcoming Junior Sisk & Ramblers Choice Album – “Longneck Blues” is Available To Radio Today!
Poor Boy’s Pleasure Releases May 27th
Mountain Fever Records is proud to announce the release of new music by Junior Sisk & Ramblers Choice. “Longneck Blues,” featuring a duet with Ronnie Bowman, is available to radio today and is the first single from the band’s upcoming album titledPoor Boy’s Pleasure, due for release in May 27th.
When looking for modern-day, traditional bluegrass at its finest, it’s quite likely one can end their search when they happen upon Junior Sisk & Ramblers Choice. Sisk cut his teeth on the legends of traditional bluegrass and proudly carries the torch of his predecessors to festivals, music halls and concert venues across the country every time his band of energetic and like-minded musicians hit the stage. The group enjoyed a long overdue nod of approval when the International Bluegrass Music Association awarded the group with Song and Album of the Year in 2012 and named Sisk their Male Vocalist of the Year in 2013. As Ken Oliver of Country Standard Time said, “Sisk… imparts personality and emotion into every song in ways that mirror the greats of country music such as Haggard or Jones.”
“Longneck Blues” is the first single from the band’s debut album for Mountain Fever Records. Written by Mike O’Reilly, the song not only features the soulful singing of Sisk, but also his dear friend and noted singer/songwriter, Ronnie Bowman. Supported by Ramblers Choice which includes Jason Davis on banjo; Jamie Harper on Fiddle; Jonathan Dillon on mandolin; Cameron Keller on bass; and special guest Aaron Ramsey on guitar, “Longneck Blues” is just a sample of what promises to be one of the band’s best albums to date.
Radio programmers may download “Longneck Blues” via AirPlayDirect. The album, Poor Boy’s Pleasure will be released May 27th. For more about Junior Sisk & Ramblers Choice, visitwww.juniorsisk.us. For more about Mountain Fever Records, visit www.mountainfever.com.
Uncategorized