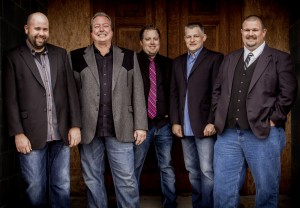 Russell Moore & IIIrd Tyme Out Ring In New Year with #1 Album, Two Top 10 Singles
It’s About Tyme Tops National Bluegrass Survey for Second Consecutive Month and Roots Music Report Top 50 Albums
Russell Moore & IIIrd Tyme Out and Break A String Records are celebrating the new year with news that the band’s latest album, It’s About Tyme, is #1 on the National Bluegrass Survey’s Top 15 Albums chart for a second consecutive month. Released September 4th, It’s About Tyme has been the fastest charting album in the band’s history, making its debut on the National Survey at #2 in November, climbing to #1 in December, and remaining in the top spot for January 2016. The album also topped the year-end Roots Music Reports Top 50 Albums chart for 2015 at #1.
It’s About Tyme gained immediate success when the first single, “Brown County Red,” debuted at #1 on Bluegrass Today’s Top 20 Monthly Songs chart just one month after its release earlier in 2015. “Brown County Red” continues to do well and is one of two songs from the album showing up in the National Bluegrass Survey’s Top 10 this month, climbing to #4, with the latest single penned by Russell Moore, “I’m Leaving You And Fort Worth Too,” coming in at #8. Bluegrass Today announced earlier that, “I’m Leaving You And Fort Worth Too” is #2 on their Top 20 Monthly Songs chart for January and a third song from the album, “Had It Not Been For The Train,” closes out the chart at #20.
In addition to becoming a hit with radio programmers and fans, journalists have also been impressed with the band’s latest recording. Bob Allen in his Bluegrass Unlimited review of the album stated, “Every one of these 14 songs is infused with irrepressible energy and intensity that we’ve come to expect from these guys. Clearly after nearly two and a half decades, a couple dozen albums, and a slew of SPBGMA and IBMA awards, the IIIrd Tyme Out juggernaut rolls on undaunted. The only downside I see to the IIIrd Tyme Out’s latest offering is that they may soon run out of shelf and wall space as the awards and accolades keep rolling in.” It’s About Tyme was released on Break A String Records and is available at www.IIIrdTymeOut.com, iTunes, Amazon and wherever great music is sold.
Russell Moore & IIIrd Tyme Out will celebrate 25 years of making ground-breaking music when the band commences their 2016 touring schedule. Moore is the International Bluegrass Music Association’s most awarded male vocalist, taking home the award a record five times. As journalist Jon Weisberger recently stated, “…it’s more than just longevity that gets Russell Moore’s name out front. The man is, to put it simply, one of the finest singers you’ll ever hear, and he makes it seem positively effortless.” Joined by four unequivocally talented musicians with Wayne Benson on mandolin, Justen Haynes on fiddle, Keith McKinnon on banjo, and Jerry Cole on bass, this band continues to bring fresh music to the ears while staying true to the tradition that has made them an industry favorite for over two decades.
Uncategorized