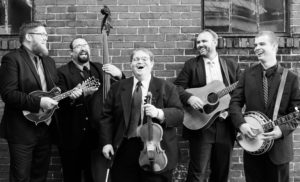 Bluegrass music’s most awarded fiddle player, Michael Cleveland is riding high alongside his award-winning band, Flamekeeper in what appears to be the group’s most successful year thus far. A 2018 GRAMMY® nominee, Cleveland is reaching new venues and being recognized for his major contribution to bluegrass music.

On March 30, Michael Cleveland will be inducted into the National Fiddler Hall of Fame (NFHoF) in Tulsa, Oklahoma. The NFHoF was formed to honor individuals for their contributions to fiddling, and to preserve, educate, and promote the art of fiddling and it’s historical and social significance. Cleveland joins an elite list of former inductees including Bob Wills, Kenny Baker, Roy Acuff, and Johnny Gimble. Cleveland & Flamekeeper will perform at the gala to be held at the Mabee Center alongside Ricky Skaggs & Kentucky Thunder.

Earlier this month, Cleveland & Flamekeeper took part in an unprecedented event when the band teamed up with The Louisville Orchestra, conducted by Teddy Abrams for a one-of-a-kind concert and creating “the world’s largest bluegrass band,” according to Cleveland. The band performed several of their original songs with the orchestra including “Lonesome Desert” composed by Cleveland, and “The Sunny Side of Town” written by Flamekeeper’s lead singer, Josh Richards. Additionally, the audience of over 1800 patrons, many of whom had never heard the band or bluegrass prior, were treated to the music of Bill Monroe with “Northern White Clouds” and “Uncle Pen,” as well as other selections previously recorded by the band such as “The Garden Wall,” “Too Late For Goodbyes,” “Blue Violet Waltz,” and “That Ol’ Train.” The crowd abruptly rose to their feet when the band closed their performance with a medley of two songs, “Leavin’ Town” which included the orchestra, and “Orange Blossom Special” featuring only Cleveland & Flamekeeper.

This summer, Cleveland will be recognized during the annual Smithville Fiddlers’ Jamboreethat draws thousands to the middle Tennessee area for a multi-day event that includes instrumental and clogging contests, and features guest performers. Cleveland will receive the Blue Blaze Award, an honor given annually to recognize a group or individual who keeps the embers of bluegrass music glowing for future generations. “Michael Cleveland embodies what we look for in a musician when choosing a recipient for the Blue Blaze Award,” said Sam Stout, President and Coordinator of the Smithville Fiddlers’ Jamboree & Crafts Festival, “He started performing at the Jamboree as a young boy, and grew his talent to an impressive career in bluegrass music.” Cleveland & Flamekeeper will perform for the event on July 7th.

Throughout 2017 and into 2018, Cleveland has been shadowed by a film crew led by director John Presley for a feature length documentary due for release this year. Flamekeeper – The Michael Cleveland Story begins prior to Cleveland’s birth throughout his lifetime and captures not only his music career, but his life without sight. Interviews with his parents, doctors, teachers, and lifelong friends, tell the honest and personal story of Cleveland, while cameo appearances with colleagues and band members, give a first-hand account of recording and traveling with Cleveland who has overcome many personal and professional obstacles to enjoy his multitude of triumphs.

“All my life, all I have ever wanted to do was play music,” says Michael Cleveland. “If anyone would have told me that I would be enjoying such an amazing ride along the way, it would have been hard to believe. I thought the GRAMMY nomination was going to be the pinnacle of my career, but being honored alongside some of my fiddle heroes is more than I could have ever dreamed. And this documentary is something that once I decided to do, I went all in, the good and the bad. I hope maybe it will help some folks, not just those with a physical challenge, to stay encouraged and follow their dreams. Because let me tell you, they absolutely come true!”