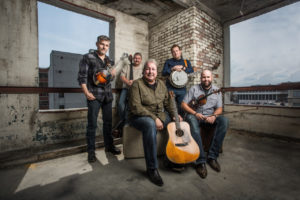 “For many years now, IIIrd Tyme Out has been one the most enjoyable – and most awarded groups in Bluegrass Music. After hearing their latest disc, I see no reason why either of those distinctions should come to an end anytime soon. I can tell you this…Bluegrass Music is in some mighty fine hands!”
Chuck Dauphin – Music News Nashville

Bio: The International Bluegrass Music Association’s (IBMA) most awarded Male Vocalist of the Year (5-time career), Russell Moore, is truly at the top of his game. Fronting one of the most popular bands in bluegrass history; Russell Moore & IIIrd Tyme Out are celebrating 25 years as one of the genres most awarded and influential groups in modern day bluegrass. Joined by four unequivocally talented musicians with Wayne Benson on mandolin, Justen Haynes on fiddle, Keith McKinnon on banjo, and Jerry Cole on bass, this band continues to bring fresh music to the ears, while staying true to the tradition that has made them an industry favorite for a quarter century. They have recorded 18 albums including Timeless Hits From The Past Bluegrassed, released exclusively in Cracker Barrel Old Country Store, and among Billboard’s Top 5 Selling Albums of 2013. They reached a new career milestone with their latest self-produced album, It’s About Tyme, which has been the fastest charting album in the band’s history, making its debut on the National Bluegrass Survey’s Top 15 Albums at #2 in November, climbing to #1 in December, and remaining at the top of the chart for an unprecedented SIX consecutive months through May 2016! Additionally, the first single, “Brown County Red” reached #1 on the National Bluegrass Survey’s Top 30 Songs chart in March while “I’m Leaving You And Fort Worth Too” reached #1 in April and May! All that success has resulted in an IBMA Awards Nomination for Album of the Year! The band is celebrating 25 years of making ground-breaking music in 2016 and as journalist Jon Weisberger recently stated, “…it’s more than just longevity that gets Russell Moore’s name out front. The man is, to put it simply, one of the finest singers you’ll ever hear, and he makes it seem positively effortless.”