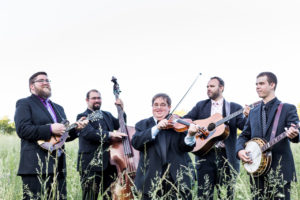 “Michael Cleveland’s fiddle sounds like a freight train going fast downhill. The playing is tight, but there is a looseness to the way it is played that makes it so fun!!”
The Sound Less Heard

Bio: Michael Cleveland is one of the premier bluegrass fiddlers of his generation and, with ten International Bluegrass Music Association (IBMA) Fiddle Player of the Year awards under his belt, he is one the most awarded and celebrated fiddler in the history of the music. Cleveland plays with so much fire, drive and virtuosity that audiences are often left shaking their heads in amazement. Together with his band Flamekeeper (four-time IBMA Instrumental Band of the Year Award winners) Cleveland delivers some of the most powerful, exciting and authentic bluegrass you can find.  The Atlanta Times gets down to the brass tacks of it; “Cleveland is as versatile as they come, but when it comes to straight-up bluegrass, whether it’s a ‘bootstomper’ or a high-and-lonesome lament, his peers are few and far between.”  Clearly, this fiery fiddler’s story is just beginning and Michael Cleveland and Flamekeeper’s future preserving and innovating the bluegrass tradition has never been brighter.